Continuing my cataloguing of classic pulps picked up last fall at a pulp fest in East Lansing, I thought I'd use some of the snowed in time to write about The Insect Warriors by Rex Dean Levie. The book came out in 1965 published through Ace Books.

Levie, it turns out, spent his early teen years writing on and off. As he grew, he took on a variety of careers that included beet picking, student teaching, and tending a cemetery. It was while working as a personal assistant to  military personnel that he became interested in just how large insects could grow after a heated debate amongst army colleagues over fifties era sci-fi movies. Levie investigated the matter, he writes in his bio, and says the ultimate answer to the question is the book.

The story appears set in some post-nuclear holocaust where insects have become enormous and man has lost his history. The hero this time around is a man named Tall who sets off to discover the origins of his species.

"But as he roamed he became more and more aware that mankind was a stranger in this insect world, that there were no other creatures remotely like men. Then where had his people come from?" (Back jacket blurb.) 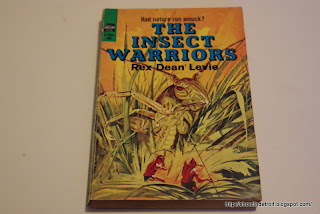