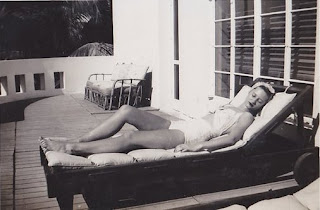 Bathing Beauty
﻿
This photo was in an old album I found while cleaning my book room. I'm not sure when I got the album or where. What I do know is this is from a family's album, that she was some place tropical, and that there is a man in an army uniform in some fo the pictures. The people were around in the 1940s. 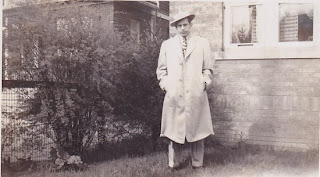 Heavy﻿
From the same album. I think the picture lives up to a thousand words. 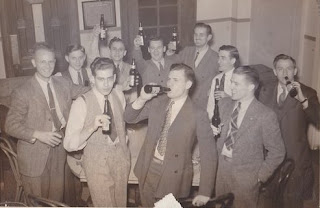 ﻿Boys and Beers
The last of the three pictures I scanned. Tens guys knocking back beers. Were they going off to war? Were they coming back from war? Was the heist a success?
Are any of these flash worthy? If they are, say around 800-1000 words. Post on your blog, put your link in the comment section. ﻿
Posted by Jack Bates at 5:57 PM

I took your challenge, here's what I came up with. Thanks for the idea, it was fun!

Hey Jack. I wonder who is buried under that bush in the "Heavy" photo.
AJ