An Interview with an Author: Keith Gilman- Cop and Writer 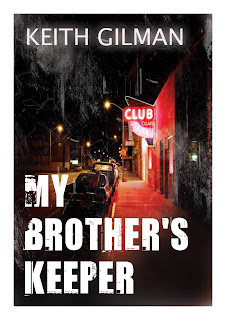 This month I spend some time talking to Philadelphia police officer Keith Gilman and discuss his latest work, My Brother’s Keeper.

Keith Gilman has been a police officer in the Philadelphia area for close to twenty years and his writing reflects that experience on many levels. He believes that cops have important stories to tell, stories that need to be told and deserve a strong voice. My Brother's Keeper is the second book in his detective series. The publisher is Severn House. His debut novel, Father's Day, won the Private Eye Writers of America Best First Novel Award and is now available in paperback. He's also had numerous short stories published in a variety of crime fiction magazines both on the web and in print. Most recently, his story Devil's Pocket, featured in the anthology Philadelphia Noir from Akashic Books, was nominated for a Macavity Award.

Visit the author at http://www.keithgilman.com/

HARD-NOSED SLEUTH: Let's start by talking about how the two worlds of being a police officer in Philadelphia and being a writer in Philadelphia converge. How much of what you write is based on actual experiences?

Keith Gilman: Readers want to know what cops know. And what cops know best is Death. They've grown accustomed to its face. They've come to recognize it in all its forms. They know it for what it is, without the glamour or the superstition. They can often see it coming. They've seen its aftermath. They've boiled it down to its most common denominators. It is the thing they are most qualified to talk about and write about.

There's a story of a rookie cop, still in the police academy, who asks a question of one of his instructors, a grizzled, old, veteran homicide detective. He wants to know how to be sure someone is dead, how to recognize it. He already knows the physical characteristics. If there's no breathing and no pulse, the person is technically dead. But is there something else he should be looking for?

The grizzled cop says only this, "Dead is dead, son. You'll know it when you see it." It didn't really answer his question but it was an answer that said something about the grizzled old cop, about where he's coming from. In My Brother's Keeper, we get to view the world through the eyes of that cop, who's seen it all and done it all. He walks the walk and he talks the talk and he pulls back the curtain on the dark stage of humanity and its crimes.

HNS: I know I get irked when I'm reading or watching stories about education and the narrative jumps the shark. Believe it or not, there are aspects of Glee that are dead on, unlike Boston Public that threw the most outlandish plots against the wall to see what would stick. Do you ever find yourself in a similar position with TV, movies, or books that have clearly not been written by someone in law enforcement?

KG: What I'm looking for in fiction is a well-told story, with vision and insight and characters that come to life. Pure realism is relatively easy to replicate. But poetic realism needs to be molded as a lump of clay into a sculpture, it needs to be drawn as a painting might. It is not merely a mirror held up to the world, though it is our eyes that must gaze into that mirror. It's a singular vision. I'd like to think that in My Brother's Keeper you'll find that singular vision and that quality of poetic realism, along with moments of extreme violence that remind the reader that this is a story of pain and death as well as redemption.

My writing style is consistently atmospheric, gritty, lyrical and haunting. The narrative contains stark imagery, strong noir elements, multiple layers of meaning and psychological depth. The setting of My Brother's Keeper is the urban landscape of Philadelphia, and there we delve not just into the soul of a city, but into the soul of a man.

HNS: I ask this of all the authors I interview, but when did you recognize your gift/desire for writing?

KG: I always had a pretty good jump shot. Other than that, writing was only thing I was relatively competent at.

MY BROTHER'S KEEPER is a detective novel set in Philadelphia, about a down-and-out, ex-Philly cop trying to put to rest the ghosts that still haunt him from his days on the street. A woman from his past returns. His old partner is killed. There's a psycho-sexual murderer loose on the streets of Philadelphia. Death is everywhere and he's learned to live with it, until it ends up on his doorstep.


BLATANT SELF PROMOTION CORNER: Heard from John Kenyon today that the anthology GRIMM TALES, could be released this month. The stories in the book re-imagine classic tales of the brothers Grimm. It includes selections by Patti Abbott, Nigel Bird, Eric Beetner, and me!
Posted by Jack Bates at 3:23 PM