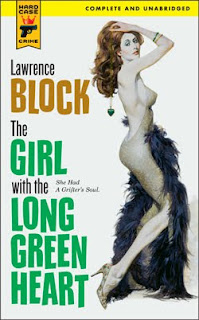 I'll say this for the Hard Case Crime series, it introduced me to Lawrence Block. Or maybe I'd been familiar with Block's work for a long time but never known it. (He did write under pseudonyms at times.) At any rate, I started reading through everything I could get my hands on that had his name on it.

Once again, what brought me in was the great over work by Robert McKinnon. Never mind that the girl on the cover of this paperback looked like a certain girl I dated in college. (This particular vixen seems to appear on other covers, so I wonder if McKinnon knew her as well?)

A pair of anti-heroes come together to pull off a master grift against a real estate tycoon. In order to get it to work, they need someone on the inside. They have to look no further than the man's secretary. Evelyn Stone is more than willing to help bring down her lecherous boss, but it will come with a price that Johnny Hayden and Doug Rance will pay before they realize it.

To me, this is classic Block. We quickly identify with these two grifters and not because we're behind their plan but because we all know people like Hayden and Rance, and we've all worked for scumbags like Gunderman.

And we've all known the power of a woman like Evelyn Stone.

The grift is complex and involves twists on intricate levels. But it doesn't lose you in its complexity. It brings you along and it adds suspense. The final twist is well worth the journey through the actual con.

Four out of five bullets.
Posted by Jack Bates at 5:20 PM