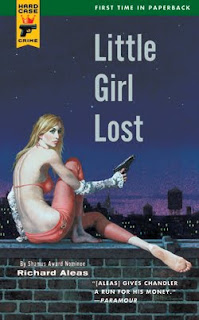 Look, I would be lying if I didn't admit one of the things that draws me into the Hard Case series is the cover art, especially when the art is done by Robert McGinnis. Google the guy; you've been looking at his work for years but probably didn't know it. When I saw the cover of Little Girl Lost, I knew I'd be in for some fun reading.

Yes, I'm judging the books by the cover because in the case of Hard Case Crime, it works.

I hated putting the book down. Richard Aleas (which is an alias) crafted a real fine tale of strippers, thugs, and PIs. He puts an updated twist on the good twin-bad twin plot line and reveals it earlier enough that I don't think it really needs a spoiler alert. Miranda Sugarman is as sultry and sexy as femme fatale's come and after a while, you can almost feel the heat of PI John Blake rising up out of the pages.

As far as private eyes go, Aleas' Blake is an intriguing detective. I thought he was worthy of more than a single follow up (Songs of Innocence to be reviewed later.) unless, of course, there are other Blake stories I haven't discovered. In Little Girl Lost, Blake has a pesky mother to deal with as he digs into his ex-girlfriend's life as a stripper. The deeper he digs, the darker her life becomes.

If I had any reservations before reading it, this book hooked me into wanting to delve into hard-boiled crime fiction.

Four and a half bullets out of five.
Posted by Jack Bates at 4:59 PM