Took a chance on this one and hauled my son out to Lansing for it. Small room in what we thought at first was an abandoned hotel. (It recently went from an exterior room entrance to an interior one but the exterior doors looked boarded up. No knobs, no hinges. We wondered what it looked like in side the rooms.)

Small and intimate gathering of collectors on hand with some incredible vintage items. Books, mostly, although we did see a good deal of original cover art work with the books they later appeared on. One went for $12,000 and exposed more of a topless woman than the  .35 cent book did. I picked up a stack of paperbacks for $10.

Part of what has always drawn me into pulps is the amazing cover work, especially the work of Robert McGinnis. I've purchased many a Hard Case Crime book based on his art. Just scroll back through this blog and you'll see why.

I'll kick off the posts with this pulp classic: 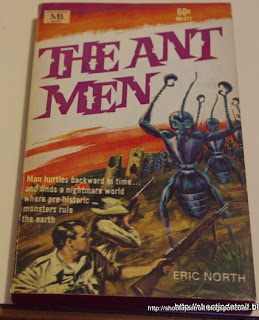 The Ant Men by Eric North
"The last five men on earth...that's how the small expedition team felt..." That's the opening line on the back cover. Inside the front in all caps is the proclamation "THIS IS THE COMPLETE TEXT OF THE HARDBOUND EDITION". To think that this book came out first as a hardcover is mind boggling. I could find no reference as to who did the cover art for Mr. North's book﻿. It clearly helped the sale on my end. Plus, how can it miss when it has characters named Dr. Wise and Nugget?
Even better?  Look closely at the ant men on the cover: They are bipeds with arms. Where are the other two limbs an ant is supposed to have? We are dealing with some serious genetic manipulation here.
" 'From which fact,' Dr. Wise said thoughtfully, 'we may safely deduce the nest, or formicary, isn't very far away.' "
Spellcheckers don't recognize the word, but thefreedictionary.com does. Formicary is a nest of ants.
I wonder if the entire story was based around it?
My son said it the best. "The SyFy Channel should buy all these stories and make them into their original movies."
Posted by Jack Bates at 5:45 PM