Alas, it was not meant to be. LAKE SOLITUDE didn't finish in the top three. It would have been cool to be in the money and to hear the script read in front of hundreds of strangers. Still, finishing in the top ten AND knowing Elmore Leonard read me is pretty freaking cool. 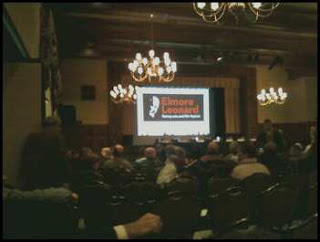 Shot from my phone at the Elmore Leonard Film Festival at the Community House in Birmingham, Michigan
The top three in the win, place, and show finishes are as follows:
THE RIDE (A Rum Runner's Short) by Daniel Drop and Thomas Hass
ALMOST DEAD by Richard Stanley
ROW 15, SEAT 1 by Paul Tarnavsky
The script requirements were as follows:
-No more than five pages
-Must include a reference or setting in Michigan
-Must involve a crime
-Story should be told through dialogue and action
It was a pretty good opening night for the three day festival. Saturday's conclusion includes a celebrity-heavy reception. Tickets are $250.﻿
Posted by Jack Bates at 5:06 AM

What did you think of the winners? If this hadn't been so expensive I would have come.

The top three were pretty good. It was hard to really get a grasp of quailty as we only had to submit five pages and didn't have to follow the rules of telling a complete story. The winning script read the best.

The first two nights were free and open to the public. The third night was the formal affair and carried the hefty price tag. I attended opening night.