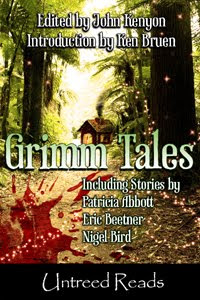 Loren Eaton joins us this week to share his wisdom on the well received and hot selling Grimm Tales. He’s a pretty prolific writer with stories scattered and planted around the web. Google him- you’ll see what I mean.

HARD-NOSED SLEUTH: I would say you're one of the established writers of this new era of Internet pulp zines. What drew you to John Kenyon's challenge for GRIMM TALES? What separated it from other opportunities? (Or are you like me and what sparks the idea gets fanned until it ignites into a full fledged story?)

LOREN EATON: You're very kind, but truth be told I'm rather new to the crime fiction world. Although I grew up reading thrillers, I fell away from the field for about a decade and only came back after discovering Peter Rozovsky's Detectives Beyond Borders blog. As for writing the stuff, I didn't begin doing that until I found Patti Abbott's stories and the various online contests she'd helmed. Once such contest was "I Love You, Megamart," which eventually became the Untreed Reads' anthology Discount Noir. When heard of her involvement with John Kenyon's fairy-tale-as-crime-fiction challenge, well, I wanted onboard!

HNS: This is one hard boiled tale. You've used an interesting style to tell it. Talk about how it developed. (Your narrator does a heck of a job bringing it to life.)

LE: For some reason, the harshness of hardboiled and noir resonates with me. I consider both Richard Stark's black-as-night The Hunter or Adrian McKinty's poetically violent Fifty Grand favorites, and I hoped to imbue my story, "King Flounder," with some of their edginess. I knew I wanted to use the Grimm fable "The Fisherman and His Wife," wherein the cupidity of a greedy angler's spouse causes a magical fish to visit them with woe. I knew that I also wanted incorporate an old, related proverb: "When you sit down to eat with a ruler / Observe carefully what is before you, / And put a knife to your throat / If you are given to appetite." Eventually, a framing device came to me, the idea of this poor guy who'd unwittingly helped the Mafia once and who ends up summoned to the kingpin's estate to receive his recompense. During the meeting, the narrating Mafioso "happens" -- note the quotation marks -- to recount a tale about someone who once asked too much of him. A most uncomfortable situation, to be sure.

HNS: Seeing as how you haven't been a guest here, I'd like to ask you what I ask all first timers and that is when did you know you were a writer?

LE: Writing found me in the ninth grade, during which I discovered it was far more fun to scratch out fan fiction based on video game franchises than to listen to my teachers.

Nice interview. Peter Rozovsky and Patti Abbott have certainly been very influential in this part of the blog world haven't they.

And I had wondered what the initial premise for Discount Noir might be...