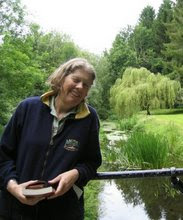 This week we spend some time with fellow anthologist Seana Graham who contributed the short ‘Gato’ to Grimm Tales.

HARD NOSED SLEUTH: You and I both enjoy books, yet we're writing in an electronic arena.
Let's talk a bit about the epublishing world and the pitfalls and highs we've experienced within it. For me, blatant self promotion wears me out but I find it necessary. Am I wrong to think I'm being narcissistic? Do you feel that way about BSP?

SEANA GRAHAM: I am in what I think is a fairly rare position when it comes to all things
publishing. I work in an independent bookstore and have for many years,
so have witnessed firsthand the way the chains, Amazon, and the whole
ebook revolution have chipped away at the profitability of what was never
exactly a get rich quick scheme to begin with.

On the other hand, I also write fiction and so have a fairly large amount
of interest and sympathy with the whole writerly philosophy of "by any
means necessary" when it comes to publishing. I also have a rather
jaundiced view of the risk-taking capacities of major publishers, and I
find in the ebook world that there is a great vitality. Sure, a lot of it
is crap, but that's true in the traditional publishing world as well, and
I am loving a lot of the stuff I see in the ebook format.

Even bookstores sell ebooks now, thanks to the advent of Google ebooks, so
I don't mind saying that I have a device to read such things on. I'm of
the generation that came of age before computers took over the world, so a
book is always going to seem a better format than an ebook, but I don't
know why that should necessarily be so for people that follow me. There
are features that appeal even to me in the device format, but I would
still always buy a physical book over a virtual one, given the choice. But
there may be a slow slide. Convenience is a pernicious thing.

As for self-promotion, I think it's hard for most writers. I am not
really interested in building a platform, as all the writing sites advise
you to do. I'm not on Facebook or Twitter, which is mainly because I'm
already on the computer way too much and figure it is not all that hard to
find me if people want to. On the other hand, I have absolutely no problem
promoting Grimm Tales, because I'm a fan of the writing of the others in
the anthology. One of the things about the blogosphere that I've really
appreciated is that self-promotion can blend quite honestly with support
and promotion of others. The community aspect of all this is fascinating
to me.

HNS: For those who haven't heard the podcast featuring you and another noted writer, tell us a little about your story in Grimm Tales: inspiration, your twist of the story, what made you choose Puss in Boots.

SG: You know it's funny, I don't really know why I chose Puss 'n Boots. At the
time, I think I consciously thought that I wouldn't do something like
Cinderella or Sleeping Beauty, mainly because I thought I'd like to use a
story that I didn't think that many people would use. As it turned out,
that didn't matter--at least four people used Hansel and Gretel as an idea
and the stories are all quite different.

What does fascinate me a year out is the unconscious choice. My mother had
died just a couple of months earlier, and my sisters and I had had our own
hospital scene with her. I'm sure I reflected on this a bit as I wrote,
but why I chose to flip all the genders, the birth order and actually the
character of the people in the story is very strange to me. I have no
explanation for it but am fairly sure it wasn't just a random coincidence.

HNS: I ask this of all first time interviewees: When did you know you were a writer?

SG: I was one of those who identified as a writer from an early age. Maybe six
or so. I don't think there was a big conflict about it until high school
or college, actually. I think I just became self-conscious about it. I
was very resistant to getting into the creative writing program or the
whole "I wanna be a writer" declaration. I think we're touching on the
reluctance to appear narcissistic that you mentioned earlier. It is so
hard to know what anything you do means, and I was hanging out with a
bunch of people who were very idealistic and thought maybe we should go
work with Mother Teresa or something. I'm not Catholic, but it was hard to
see where writing fiction fit into all that.

I'm still not sure, by the way, but I have since discovered that I am not
really the Mother Teresa type...

Thanks for the opportunity, Jack!

Seana Graham works at an independent bookstore in Santa Cruz, California. She has published stories in a variety of literary magazines, including Salamander, Eclipse and Eleven Eleven. Her short story “The Pirate’s True Love” was collected in the anthology The Best of Lady Churchill’s Rosebud Wristlet, and her work is included in The Carpathian Shadows series, edited by Lia Schizas. She has also co-authored a book of trivia about Southern California, where she spent her early, formative years.

A couple of her conversations with Rick Kleffel, radio interviewer of the Agony column can be found here:

Seana also writes a handful of blogs including Confessions of Ignorance and Not New for Long. She is still not entirely sure why she does this.

BLATANT SELF PROMOTION CORNER:
Nigel Byrd is running a short ‘Dancing with Myself’ interview featuring me interviewing me over at his blog Sea Minor. Here’s the link:
http://nigelpbird.blogspot.com/2012/01/grimm-tales-from-jack-bates.html

BLATANT SELF PROMOTION IN THE OTHER CORNER: Grimm Tales, Monkey See- Monkey Murder, and Discount Noir are all available at http://www.untreedreads.com/

COMING UP NEXT: Just about time for a Flash Jab Challenge, isn’t it?
Posted by Jack Bates at 4:34 PM

Thanks, Paul. It's fun that there is so much going on around the book on our various blogs, etc.