I used to say my dad had an uncanny knack for picking the next short lived TV series. Looking at the reviews I’ve done so far, I’d say latching on to television’s next big bombs are in my DNA. I raved about the Charlie’s Angels reboot- gone. Gave high praise to Mario Bello in Prime Suspect- kaput. I was a huge fan of Detroit 187- remember that one? Naturally, I am hesitant to say anything about NBC’s midseason replacement, Awake.

Jason Isaacs plays a bad ass cop named Michael Britten who has a slight case of a sleeping disorder. In one world he dreams of his dead wife, in the other, his dead son. Which is reality? How do clues in one world how solve cases in the other? I thought the writers were about to botch it all up a week ago when we got a couple of story lines that did not come from Britten’s point of view. They recovered nicely in the alternate therapy sessions. Acclaimed actors Cherry Jones (Broadway), B.D. Wong (Law and Order: SVU), Steve Harris (The Practice), and Wilmer Valderrama (That ‘70s Show) make a solid supporting cast.

Isaacs is a stand out actor most of us here in the states recognize as Lucius Malfoy, the father to Draco Malfoy in the Harry Potter movies. Last fall Masterpiece Mystery on PBS ran a three episode series called Case Histories where Isaac played ex-cop turned PI Jackson Brodie. Isaacs plays his characters with an edge, tough and hard when he needs to be but also with a little compassion. Think Mike Hammer meets Columbo.

Catch it while you can. Awake is on my Favorites List. That can’t be good.

BLATANT SELF PROMOTION: I am excited and proud to say I have a story in the premiere issue of GRIFT Magazine. I’ll be appearing alongside the likes of Ken Bruen, Craig McDonald, and Lawrence Block! Check out my story 'A Hell of a Hat' here: http://www.lulu.com/shop/john-kenyon/grift-no-1/paperback/product-20005345.html Huzzah! 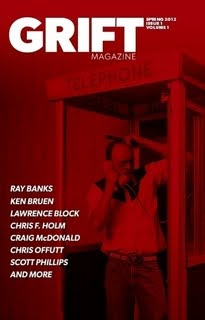 I like AWAKE too.
Congrats on the story in GRIFT.