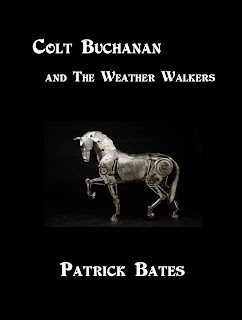 COLT BUCHANAN AND THE WEATHER WALKERS is the first in what I hope will be a series of steampunk westerns centered around a young character named Colt Buchanan.

Colt Buchanan hasn't quite figured out that he is the son of two of the country's greatest tinkerers and thinkers but that is all about to change. In the wake of a devastating attack by a gang of tornado riding outlaws known as the Weather Walkers, Colt wakes to find his home destroyed and his parents missing. Alone in the northwestern wilderness, Colt clings to the memories of his mother and father, recalling the stories his father told him as he clutches his mother’s handmade pillow for comfort.

Into his life comes a mysterious man who explains to Colt that places like Fort Discovery and the Institute for Reformed Science are as real as real as Colt himself. Colt had always thought they were just bedtime stories his father told him. Soon enough Colt will meet mechanical men and the scientists who invent them, including the top tinkerer himself, Dr. Elkin Wanderer. It won't be easy; Colt will have to survive a wild ride through the clouds when the Weather Walkers ambush him on his journey.

It will take some time for Colt to adjust to the new world of contraptions. Once he does, he and his band of confederates will have to work together to fend off one last big attack from the Weather Walkers who want nothing more than to destroy Fort Discovery and the man who built it.

The book should launch soon.

UPDATE: Colt has launched! Here is the Amazon link: http://tinyurl.com/7zq6blb
Posted by Jack Bates at 4:43 PM

That cover is beautiful... did you do it yourself..? xx