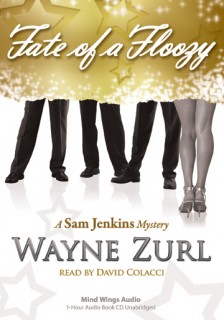 Fate of a Floozy

Wayne Zurl grew up on Long Island and retired after twenty years with the Suffolk County Police Department, one of the largest municipal law enforcement agencies in New York and the nation. For thirteen of those years he served as a section commander supervising investigators. He is a graduate of SUNY, Empire State College and served on active duty in the US Army during the Vietnam War and later in the reserves. Zurl left New York to live in the foothills of the Great Smoky Mountains of Tennessee with his wife, Barbara.

Fourteen (14) of his Sam Jenkins mysteries have been produced as audio books and simultaneously published as eBooks. Ten (10) of these novelettes are now available in print under the titles A MURDER IN KNOXVILLE and Other Smoky Mountain Mysteries and REENACTING A MURDER and Other Smoky Mountain Mysteries. Zurl’s first full-length novel, A NEW PROSPECT, was named best mystery at the 2011 Indie Book Awards, chosen as 1st Runner-Up from all Commercial Fiction at the 2012 Eric Hoffer Book Awards, and was nominated for a Montaigne Medal and First Horizon Book Award. His second novel, A LEPRECHAUN’S LAMENT, is available in hardcover, paperback, and Kindle. HEROES & LOVERS is scheduled for release later this year.

HARD NOSED SLEUTH:  What drew you to Mind Wings?

WAYNE ZURL: Back in 2006 I finished my first novel, A NEW PROSPECT, and started querying agents. As the rejection letters trickled in, I began writing shorter pieces—novelettes—for practice. I based them on cases I investigated, supervised, or just knew a lot about from my time in the police Department. I ended up with a half-dozen stories around 10,000 words each.
I liked the finished products, so I sent one to mainstream mystery magazines like Alfred Hitchcock, Ellery Queen, and Strand. I got no takers, but one acquisitions editor had the courtesy to explain the reason for my rejection.

“We only publish one novelette a year and everybody writes them,” he said. “I got a stack on my desk. James Patterson sent one. Who do you think I’m gonna pick, him or you?”
Enough said. I put my manuscripts back on the shelf and looked for new places to peddle them.
Then somewhere, I can’t remember where, I found Mind Wings Audio looking for stories between 7,800 and 11,000 words, to produce as 55 to 70 minute “commuter” audio books. “Eureka,” I said, and submitted a thing called A LABOR DAY MURDER. The publisher, Mary Gould, liked it and sent me a contract. So far, I’ve been lucky. Mind Wings just accepted my 14th—GYPSIES, TRAMPS & THIEVES, a story about a crew of Romani grifters operating in East Tennessee.

HNS:  Talk a little bit about Chief Sam Jenkins and how he and the Smoky Mountain mysteries came about.

WZ: Sam is easy to talk about because we share a few similarities. Basically, we’re middle-aged, retired New York cops living in East Tennessee. But it goes beyond that and you’d have to read a few Smoky Mountain mysteries to see what I mean.

Knowing Sam intimately made it easy to write his dialogue. We’ve lived through the same experiences, so if I’d say something in any given situation, Sam does. But now he’s a police chief and I’m his Doctor Watson.

Actually, I borrowed the idea of a big town detective becoming a small town chief from the late Robert B. Parker’s Jesse Stone series. But that’s as far as my thievery went. Sam and Jesse are very different and Paradise, Massachusetts is world’s away from Prospect, Tennessee.
In my naiveté, I thought if Parker can do it, so can I. I was a cop and he wasn’t. I’d just transplant my New York stories toTennessee. Easy, huh?

It took me four years to get my first novel traditionally published. The first Sam Jenkins Audio/eBook novelette debuted in 2009.

HNS:  I ask everyone this but when did you know you were a writer?

WZ: I’ve been writing my entire adult life, from after-action reports in the Army, to the reams of narrative reports I filed in the police department. But even after getting paid for a bunch of non-fiction magazine articles and seeing a few pieces of fiction published, I was reluctant to introduce myself as a writer.

I guess it was after A NEW PROSPECT won the “Indie” that my ideas changed. In retrospect, I should have had those business cards printed a lot sooner.

The day I was inducted into the Army, people called me a soldier. Yet I had never fired a shot to defend the Constitution. When I graduated from the police academy, I hadn't arrested anyone, saved anyone’s life, or delivered a baby. Nonetheless, I was getting paid as a cop. So, although I've not seen my name on the New York Times bestseller list (yet) I’m going to say Zurl’s a mystery writer.

Thanks, Jack, for inviting me to your blog and allowing me to chat with your fans and followers. Best of luck to you with your books and I hope I've made a few new friends.

BLATANT SELF PROMOTION CORNER: Mark July 1 on your calendar. The first of a three part series with Grit City Publications, an emotobook publisher, will premiere. It will introduce Lily Dair, a young archeologist with a penchant for danger. What is an emotobokk? Check out the media page:http://gritcitypublications.com/Grit_City_Publications/Lily_Dair.html
Posted by Jack Bates at 3:55 PM

Hey Jack,
Thanks for inviting me to your blog. I love the title. Shades of Philip Marlowe. All the best, wz