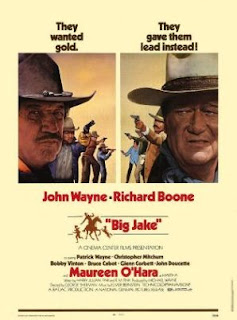 Speaking out against the Duke is like saying I hate baseball, apple pies, and the one time leading domestic car Chevrolet. Still, yesterday while wtching one of my all time favorite John Wayne films, I couldn't help but notice that two dogs were used to play Dog. I know it's not uncommon, but using two different types of dog to play the same one has to be. In the non-violent scenes, Dog (character name) is a Lassie collie. In the violent scenes, the dog is jet black and smaller. It's like shooting a car chase with the bad guys first in a Corvette and then later in a Dodge Ram then back again to the Corvette all during the same chase.

Okay, so after watching this film for almost 40 years, a little continuity slip up from the 70's doesn't ruin it. Richard Boone as the black-hatted villan opposite the Duke makes for some classic good guy/bad guy tension, kind of foreshadowing their final film work together in The Shootist. Patrick Wayne and Chris Mitchum do some of their better acting in the shadows of their dads, and Robert Mitchum isn't even in this one but for some reason, his presence is felt. Maureen O'Hara is proud and stoic and looks admiringly at John Wayne in their scenes together. The Duke had nearly all of his surviving friends in this film, which would explain Bruce Cabot as a Native American. Only ones missing were Forrest Tucker, Ward Bond, John Agar, and Andrew Prine.
And I can't helpt but think that the writers of Escape from New York borrowed a key phrase from this movie. As soon as John Wayne shows up, people start echoing, "I thought your were dead." Snake Pliskin probably learned a thing or two from Big Jake McCandles.

Four and a half bullets outta five.
Posted by Jack Bates at 9:28 AM