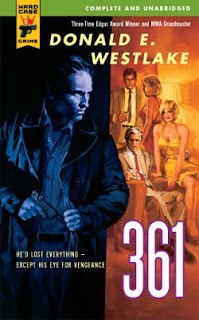 The second in the reading series for me. It was a much better hard-boiled crime read, which is what I had been looking for, than The Colorado Kid. Donald E. Westlake was new to me, although years ago I happened upon the Lee Marvin tough guy movie Point Blank which turned out to be written by Westlake as well.

361 is a hard hitting revenge story that sends its young protagonist, Ray Kelly, out after the men that gunned down his father and the man who hired them to do it. Kelly works his way into the organization by being as tough as the men he has sworn to kill, never letting on what his plans are.

It's a quick, entertaining ride. It's like a left hook before the right upper cut, knocking you almost out as you come into the final round. Good stuff.

Four out of five bullets.
Posted by Jack Bates at 5:40 PM