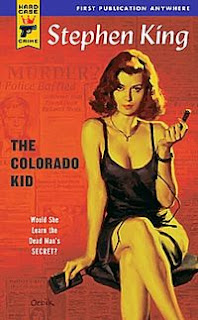 The Colorado Kid was the first Hard Case Crime novel I read. I didn't realize it was going to launch me on a journey through nearly the entire run of the Hard Case line. I remember seeing it at a mall bookstore, amazed that King's name was on the spine. I took a chance on it and while I didn't think it was the greatest mystery novel ever, there were elements of it I found intriguing.
King pulls a fast one on the reader, even going so far as to point it out in the Afterword. He warns us we'll either go along with him for it or hate him for it. I went along with him. Look, some of King's best work is not in the horror genre. He has a great ability to make a reader feel like he is eavesdropping on the people in the story. The characterization is rich, the settings quaint with just the right amount of dread creeping in like a Maine fog. Plus, the cover artists for this line of books know just how to play a lady's curves.
So while the mystery is thin, the story is engaging through its three main characters- a couple of crusty old timers and a young cub reporter who could be either's great-granddaughter.
Three out of five bullets.
Posted by Jack Bates at 4:14 PM